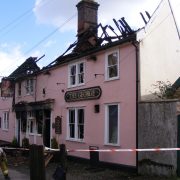 A pub in Wickham Market which was destroyed by a devastating fire is urging the local community to come together this Saturday for a “flash mob” photograph to raise awareness of its plight. Here Shaun Soanes explains how Nicholas Jacob Architects is getting behind the move and aims to help bring it back to life.

This Saturday a crowd of villagers are set to unite in the centre of their community to help save their fire damaged pub.

Grade II listed George pub, the last surviving pub in Wickham Market, was consumed by fire in the early hours of April 18th, 2013, leaving behind a charred shell of what was once a thriving, bustling focal point. Since then, the pub has been left derelict and in need of complete restoration.

Now a team of people within the village with expertise in heritage, law, business, finance, project management and marketing have come together to fight and save it. And the “flash mob” aims to draw attention to their plight.

This major event will launch a community share scheme.

The George Community Pub Group estimates it needs to raise around £300,000 by selling shares to the community so villagers are being urged to attend Wickham Market Square at noon on Saturday, May 12, and “bring the family, dogs and all”.

In a plea to villagers, the group has posted flyers saying: “To achieve Lottery funding and save the George we need a big display of community support. So let’s show them how much we want to get rid of that scaffolding.”

People attending the launch will receive a free drinks voucher to redeem when the George reopens. They will also be able to learn more about the share scheme, which will see a prospectus and application form sent to every household in the village.

A similar scheme helped villagers in Washbrook raise £90,000 to save the Brook Inn, while other Suffolk pubs to be taken over by the community include the Sorrel Horse in Shottisham, the Duke of Marlborough in Somersham and the Case is Altered in Bentley.

Last week, a group of villagers in Laxfield bought the King’s Head from Adnams.

Where do we come in?

Nicholas Jacob Architects have been working with the George Community Pub Group to produce a scheme which has broad support for the community and local authority and we have been supporting the group to win funding streams such as the Heritage Lottery Fund.

This follows the success of another project we have been involved in at the Electric Palace in Harwich, assisting it with a successful bid to win a £635,000 Heritage Lottery grant.

This will enable the cinema trust to undertake essential conservation work to secure this unique part of Harwich’s heritage for generations to come.

Our expertise on restoration is second to none and we have worked on big and small projects. We are also experienced in restoration following fire and were involved in renovating the historic Oulton Hall near Aylsham, an 18th century building bursting with character which had been gutted by an inferno fanned by high winds.

Looking to the future

The George is steeped in history and this should be preserved at all costs.

At its height in about 1910 Wickham Market had seven public houses serving a community of 1,417. By 1999 all but one of these pubs closed, leaving the George as the last. The George is one of the four earliest recorded inns in the village and is thought to date back some five centuries.

We eagerly look forward to working on restoring The George and repairing all that was lost to the flames. We also urge the community to turn out for this weekend’s flash mob.

NJ Architects set to make a splash for charity