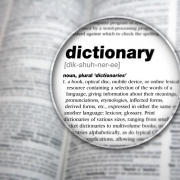 Architects struggle to drop the jargon and engage the public. That was the message from writer and broadcaster Tom Dyckhoff earlier this month after he started a furious Twitter argument by suggesting that architects speak in deliberately unintelligible language. Here Shaun Soanes joins the debate.

“How architects talk: ‘Spatiality, interrogation, materiality, praxis.’,” Tom Dyckhoff wrote on his Twitter page. “What the rest of the world hears: ‘Blah, blah, blah.’ Poor communication skills start in architecture school and get worse from there. No wonder architecture’s in the state it’s in.”

Dyckhoff has spent over a decade writing about architecture in the national press, and his argument prompted dozens of comments, mostly in support.

But London-based architect Sam Jacob waded in to the fray saying architecture needed specific language to describe it.

He added: “Architecture is a specialist subject with deep culture, long history, involved technologies and complex politics. Of course, it needs specific types of language to talk about it!”

All professions are plagued by technical language.

Doctors, having spent many years immersed in the biology of human health and disease, often overestimate the health literacy of their patients.

Meanwhile MPs have been criticised for their linguistic sea of rollouts, step changes, public domains, fit for purposes, stakeholder engagements, win-wins and level playing fields in the House of Commons.
The corporate world can be an impenetrable place even without the code words that those on the inside abuse with abandon.

These include “touch base offline”, “blue sky thinking” and “thinking outside the box”.

Architects are so well-known for their jargon that there is actually a word for it – archispeak. The Urban Dictionary defines this as: “Large, made-up words that architects and designers use to make themselves sound smarter than you (you being the client or the confused observer of design). It does nothing to inform or enlighten the consumer of architecture and mostly serves to numb them into obedience or self-doubt.”

As Dyckhoff points out, he sees “no problem in having a technical language within a profession” but “it’s when communicating with the rest of the universe that the problems arise.”

Of course, sometimes concepts are too complex to express in everyday language, and some words refer to obscure architectural ideas that the general public would likely not have previous knowledge of.

What we need to be aware of is that there’s a difference between talking to other architects and talking to people outside the profession.

We also need to address intent.

Is there a simpler way to describe something or are you using jargon just to be pretentious?

In my opinion, if those of us calling ourselves ‘architects’ want our hard-earned skill sets taken seriously, then we need to make ourselves understood.

The truth is, the ability to communicate effectively is of utmost importance in all professional fields, particularly where we need to explain complex details.

We believe in taking time to clarify and answer any questions clients have about our work.

But we also use a variety of tools to connect with our audience including drawings, models, photographs and videos.

This means we can help people understand a concept, design or project even when we can’t find the best words to communicate with.

We always strive to keep things as clear, concise and jargon-free as possible. We don’t patronise – but equally we don’t like to confuse.

After all, we want you to understand – and play a part in – the design process. And that starts with conversation.