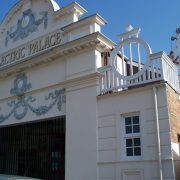 Nicholas Jacob Architects has joined a newspaper campaign to save The Electric Palace in Harwich, which is in desperate need of renovation and restoration. Here Shaun Soanes, who is drawing up designs for the refurbishment, urges the community to get behind a fundraising drive to support the next stage of the project.

A £700,000 project is in the pipeline for the grade two star listed Electric Palace in King’s Quay Street, Harwich, which hinges on a heritage lottery grant. But the Electric Palace Trust is also striving to raise £60,000 itself towards the works. If both the bid and the campaign – run by the Harwich and Manningtree Standard – are successful the 105-year-old building will have a renovated ceiling, new seating, new internal decoration and a refurbishment of the exterior.

At Nicholas Jacob Architects we have been tasked with planning the work ahead. We already have a long relationship with the building and have been part of various works over the last 15 years including repairing rusted ironworks under the flooring. Now we need to secure the original plaster on the ceiling, which is beyond its average lifespan. This is an urgent requirement especially in light of the disaster at the Apollo theatre in London in 2013 when the ceiling collapsed injuring 88 people. At the Electric Palace there is no space above the ceiling so we will need to take off the roof and put a laminate to the back of it to reinforce it. We are also looking at improvements to the stage and seating area as well as lighting, making sure whatever is done is stylistically appropriate.

The trust members are wonderful custodians of the building and it’s great that The Standard is backing a funding campaign and involving their local community in securing the future of this historic landmark. After all, the Electric Palace is one of the UK’s oldest purpose-built cinemas. It boasts a silent screen, original projection room, ornamental frontage, an open plan entrance lobby complete with paybox, a small stage and dressing rooms. It was built in just 18 weeks at a cost of £1,500 and opened in 1911 with a screening of the black and white film Battle of Trafalgar and The Death of Nelson. It enjoyed success throughout the 1920s and 1930s but in 1956 it closed and soon fell into disrepair, becoming derelict until 1972, when it was rediscovered in a town study by Gordon Miller and the students of Kingston Polytechnic. At the time, the council had planned to demolish all the buildings in the area and build a lorry park instead. Detailed survey drawings and original pictures from Mr Miller show the cinema in a neglected state, with cracked facades, peeling paint and gaping holes in the roof.

In 1975 the Electric Palace Trust was formed to restore the cinema and it reopened in 1981.

The new work will be the first time the palace has been redecorated.

If funding is approved work can begin in spring next year.

The next fundraising event for the appeal will be on June 4 with a screening of A Quiet Passion, the life story of American poet Emily Dickenson, followed by a question and answer session with writer and director Terance Davies.

What does the election result mean for architecture?
Scroll to top