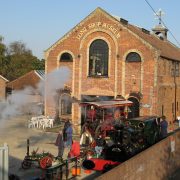 We are delighted to be starting work on revitalising a one of Suffolk’s historical gems thanks to grant funding.

Our team has been charged with developing The Long Shop Museum in Leiston after it was awarded initial support by the Heritage Lottery Fund (HLF) towards a £2.6 million project.

We were engaged in the initial phase of the project at the former Garrett Engineering Works which involved restoration of production line machinery.

And are now set to begin work on an overhaul of the museum providing an enhanced visitor experience.

Associate Hugh Bunbury, who will lead the team, said: “The work includes repair, restoration and rejuvenation to an extremely significant building with a rich history.

“The passage of time has taken its toll and major restoration work is now needed throughout the museum to ensure the future of its listed buildings and to update its displays and facilities.

“The plans will protect it for generations to come while allowing visitors the opportunity to look back in time and see how the building has operated in the past.”

The Long Shop is a beacon of industrial heritage in East Suffolk and was built to assemble portable steam engines more than 160 years ago.

Run by the Garrett family from 1778 to 1932, the factory produced agricultural machinery and early steam engines.

After the age of steam, the industrial works, which employed more than 2,500 people at their height, made pioneering electric-powered vehicles and Britain’s first diesel lorry, as well as hundreds of thousands of shell casings during the world wars.

The site was used until 1980 when it was rescued from demolition and was established as a museum.

The Heritage Lottery Funding will be used to restore the Victorian factory buildings, showcase collections and provide new facilities.

There will be a cafe, community hub and a youth shed where young people can learn basic engineering skills.

Anna Mercer, curator at the museum, said: “The work will unlock its unrealised potential as a unique and brilliant place which continues to generate interest, understanding and pride in our industrial and engineering heritage amongst people of all ages and from all walks of life.”

What is your favourite building in Suffolk?
Scroll to top