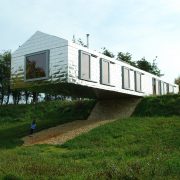 We have always been proud to call Suffolk our home.

Not only does it boast beautiful coast and country landscapes but it is also full of interesting and unique architecture.

In fact, two fat volumes in the Pevsner Architectural Guides series – totaling 1,300 pages, with 200 colour photographs – are now dedicated to our great county.

Several Nicholas Jacob Architect projects are included in this – our work on Hoxne Hall, on the Church of St Margaret, Ipswich and work on Yaxley Hall. We also feature in relation to our restoration of the Abbey in Bury St Edmunds, which is arguably one of the most beautiful old buildings in the region.

Our team have been debating which other Suffolk buildings deserve a special mention.
So we thought we would share their thoughts – and a bit of background on their favourite spots – with you here.

Architect: Shaun Soanes
Favourite Building: The Balancing Barn
Background: This precarious-looking holiday cottage was dreamt up by Living Architecture, a social enterprise creatively led by Alain de Botton. Suspended over the Suffolk countryside, it was designed to provoke a gut reaction to nature and architecture. It is certainly one of the most unique holiday homes in the country. Another would be the House in the Clouds, Thorpeness, which was once an unattractive water tower, until it was transformed in the 1920s by Glencairn Stuart Ogilvie to fit in with the mock-Tudor and Jacobean style of the private fantasy holiday village he was creating.
Shaun says: “It’s very difficult to pick a favourite but in terms of modern building The Balancing Barn is rather nice. Historically I love the splendid array of framed buildings in Lavenham. The wonderful depth of structures and shapes is unique.”

Architect: James Francis
Favourite Building: The Willis building, Ipswich
Background: The Willis building (originally the Willis Corroon Headquarters) is one of the earliest buildings designed by Norman Foster after he established Foster Associates. Constructed between 1970 and 1975 for the insurance firm now known as Willis Towers Watson, it is now seen as a landmark in the development of the ‘high tech’ architectural style. The building houses some 1,300 office staff in open plan offices spread over three floors.
James says: “This is such an important building in terms of how thinking about modern workplaces should be. It’s very much of the times that it was born from but was a true leader in many areas and pushed the materials technology of the time.
“The now commonplace use of structural glazing owes much to this building and the transition from day to night is fantastic, where the tapestry of day time reflections dissolves to expose the workings of the building at dusk.”

Architect: Hugh Bunbury
Favourite Building: Holy Trinity Church, Blythburgh
Background: The church of the Most Holy Trinity, Blythburgh is a well-known and much-loved church in Suffolk and because of that is connected to some extraordinary legends. The first is that Blythburgh, now a tiny village bisected by the fearsome A12 between London and the east coast ports, was once a thriving medieval town. This idea is used to explain the size of the church; in reality, it is almost certainly not the case. Blythburgh has always been small. But it did have an important medieval priory, and its church attracted enough wealthy piety on the eve of the Reformation to bankroll a spectacular rebuilding.
Hugh says: “I’ve lived in Suffolk all my life but have probably not seen half of it yet so it’s a bit unfair to pick one stand out piece of architecture. For drama in the landscape Blythburgh Church is quite something however.”

Architect: Pippa Jacob
Favourite Building: The Dune House
Background: The Dune House lies just to the south of the picturesque village of Thorpeness, on an idyllic spot on the very edge of the sea and nestled among rolling dunes. Living Architecture invited one of Norway’s most renowned practices Jarmund Vigsnaes Architects to create the house on this archetypally English seaside site. JVA, as they are known, made their name building a series of accomplished houses in Oslo and its outskirts and intimately understood the need to balance the advantages of modernity with the traditional virtues of warmth and comfort.
Pippa says: “We are very lucky to have a lot of inspirational buildings in our home county and I am a big fan of the Dune House by Jarmund Vigsnaes Architects and Mole Architects, which is one of the projects for Living Architecture.

What is your favourite Suffolk landmark and why?

Protecting a historical gem for generations to come

The renovations continue at St Margaret’s Church
Scroll to top