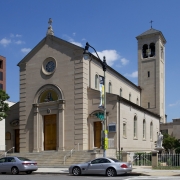 Church architecture has certainly evolved over time. For example, the basic construction feature of a church is that it’s designed as a cross. The shape is usually long and rectangular alone with rectangles on the sides, and one at the front that represents the altar space which is also the sanctuary point.

Churches are characterised with a dome and a vaulted space made in the middle which draws attention towards the skyline. Churches can also often represent a circular form which represents eternity. Or if they have the shape of a star, they represent how a church brings the light of faith to the world.

Another characteristic feature is a tall tower or spire that is created on the west end of a church which represents the crossing – see the example in our featured image.

The origin of church buildings and their architecture designs can also be traced back to the Roman civilisation. When Roman Empire embraced Christianity, the Pope was given the most important position in church as well as ceremonial rights. At this time, the architecture of churches developed.

In our modern era, old and disused churches have been converted to schools, theatres, cinemas and other public buildings. On the other hand, the trend to convert old buildings into places of worship is not unusual. This has happened in the UK with buildings that were former tram stations, garages, cinemas and even a windmill.

How to make your home happy and relaxed