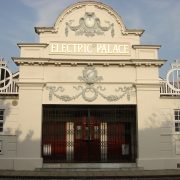 We are thrilled to announce that thanks to a £653,000 lottery grant, we are set to begin work restoring one of Britain’s oldest surviving purpose-built cinemas.

The Electric Palace cinema, Harwich, boasts a silent screen, original projection room and ornamental frontage, is a building of national significance in the history of cinema in the UK.

Paul Coleman, associate at DCP said: “Securing this level of funding is a major step forward in restoring the fabric of the building and breathing new life into the site.

“We are delighted to be involved in this exciting project, continuing our long relationship with NJ Architects, and helping to ensure the future of this landmark building in historic Harwich.”

David Looser, chairman of the Electric Palace Trust, said the lottery funding would allow the trustees to undertake essential conservation work to strengthen the ceiling of the building, redecorate the auditorium, refurbish the seats and toilets, replace electrical switchgear, enlarge the stage and enhance security.

“We’re delighted that we’ve received this support thanks to National Lottery players,” he said.

“This will enable us not only to do the work necessary to keep the Electric Palace operating for the foreseeable future but also to expand our range of activities.”

The Electric Palace cinema was built in 18 weeks at a cost of £1,500 and opened in 1911 with a screening of the black and white film Battle of Trafalgar and The Death of Nelson.

Designed by architect Harold Hooper and developed by Charles Thurston, a travelling showman, the venue, in Kings Quay Street, ran successfully for 45 years, closing only briefly in 1953 due to flooding.

Since then members of the Electric Palace Trust and volunteers have managed – and continue to work – to protect the building and this is recognised by the cinema’s status as a Grade II* listed building.

The venue was officially re-opened in 1981 and, thanks to a minor refurbishment in 1985, it now runs as a community cinema which shows films every weekend as well as special live and music events.

The palace trust announced the Heritage Lottery Fund grant this week, which follows £51,000 from the same fund last January.

But the trust’s own appeal to raise £60,000 towards the work needed is still ongoing.

Chris Strachan, Electric Palace Trust trustee, said: “There is an expectation we will provide our own funds that amount to 10 per cent of that sum.”

Mixing old and new in architecture of the future