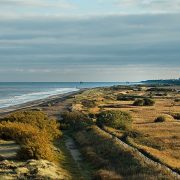 Water – and its proximity – can dramatically influence architecture. Here Shaun Soanes explores the design and stability of buildings by the coast.

Based as we are in on the Suffolk coast, we know better than anyone the calm, serenity and beauty that exists in communities situated close to the water.

From Martello Towers, built in the early 1800s to defend the south and east of England from an attack from France, to the beach houses mounted on stilts in Walberswick and Southwold and the dozens of lighthouses instrumental in helping guide our ships home safely, our shoreline is choc-a-block with buildings designed to withstand the elements and work in conjunction with their surroundings.

Architects must work cleverly to navigate the complexities of the coast to build structures that make the most of, but don’t negatively impact, the local environment.

Water is unpredictable. In the last few years there have been a number of storms, tidal surges and localised flooding in the East and beyond. The duty of architects and planners is to build resilient communities with infrastructure that can stand up to these unpredictable forces.

Firstly, coastal environments are well-known for regularly experiencing high winds and stormy weather, which can cause a number of issues. Buildings that don’t use appropriate wind resistant materials are likely to see the effects of weathering and storm damage, a common example being lost roof tiles.

Rising sea levels can also be a major issue when planning coastal architecture.  It is estimated that sea levels rise at a rate of about 3mm/year worldwide. There is also the issue of damp, which can occur in any housing as water easily finds its way into small crevasses. Living by the sea can increase chances of damp significantly.

Additionally, when constructing properties in coastal regions, there is often more of a need to build using materials that are resistant. Unlike structures built inland, coastal properties are exposed to saltwater environments and high winds, which can have an effect on the buildings over time. Exposure to a saltwater environment can have a serious effect on a building because salt crystallisation can form in stone walls and rust in metal materials. Properties built in coastal regions should be constructed using durable materials that can withstand the effects of the surrounding environment.

The problem of coastal erosion

Bryony Nierop-Reading was evicted by the sea. Since Cyclone Xaver struck the Norfolk coast in December 2013, threatening to destroy her bungalow atop the sandy cliffs of Happisburgh, she has been living in a ramshackle caravan perched on what is left of her small paddock.

Like most people who choose a home on the cliffs, Nierop-Reading felt an intimate connection with the sea. She bought her three-bedroom bungalow with nearly an acre of land in 2008 and, although the cliff just beyond her garden was rapidly eroding, she still hoped she would enjoy a 25-year retirement there. Sadly, this has not come to fruition.

We have always been powerless to halt the waves – but that has not stopped us trying. We have built towns and cities behind sea walls – since 1982, London has been protected by the Thames Barrier, a series of rotating gates that stop high tides from swamping the capital. And, along the low-lying coast of East Anglia, we have reclaimed thousands of acres of productive farmland by draining estuaries and salt marshes.

But the defence is getting harder and the people who live along its coastlines are divided between those whose ambition is to hold back the sea and others who insist the government must step in and help people retreat.

Do it right or lose it all

There are a number of villages around the UK which have been abandoned because of a combination of coastal erosion, building development and population growth.

Closest to us is the village of Dunwich which still stands a few miles from Southwold but used to be a much larger town. In the 11th century, it had a large port, a naval base, two seats in parliament and one-sixth of the population of London. Unfortunately, the coastline in which it stands is one of the fastest eroding in Europe. Couple this with a storm surge in 1286, and two ‘great storms’ the following year, and the decline was sealed.

Dunwich is now home to fewer than 200 people, with just a couple of amenities and a pub. Many of the original buildings were pulled over a cliff, and now rest up to ten metres below the waterline.

Other lost villages include Hallsands, south Devon. At the turn of the 20th century, it was the home of around 160 people and a small fishing community, but by 1917, only one house was habitable.

Coastal flooding and erosion destroyed most of the Norfolk village of Eccles by the turn of the 17th century. After a serious flood in 1604, the village was left with just fourteen houses, and flooding in 1895 destroyed the church tower.

The Norfolk coast is infamous for being one of the fastest eroding coastlines in Europe, because of a mix of soft clay and the battering waves of the North Sea.

The sky’s the limit with drone technology

Architects “step back into the playroom” with Lego
Scroll to top