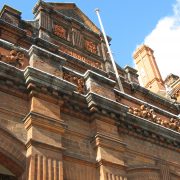 Protecting buildings of historic importance is part and parcel of the work we carry out on a daily basis. Here Hugh Bunbury, who has been assessing some defects in one of Ipswich’s most impressive landmarks, explains.

Ipswich is one of England’s oldest towns, if not the oldest. This means it is full of interesting and historically significant buildings from various periods. Among these is Ipswich Museum – a beautiful red brick structure with elaborate cut brick and terracotta embellishment.

Nicholas Jacob Architects has worked with the trustees of this fine piece of Victorian and Edwardian architecture for a number of years and in 2009 carried out a complete condition survey. This has served to provide a series of benchmarks for subsequent reviews of the building.

The visible appearance of a defect in an old building can sometimes appear much worse than the underlying cause. For example, a small degree of building movement will result in an unfortunate eyesore in a finely decorated interior but go quite undetected in an old framed barn. 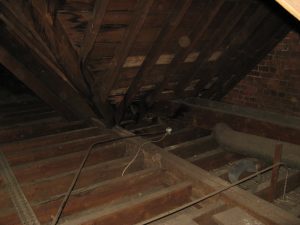 We recently answered a request to look at some cracked plasterwork at Ipswich Museum. As a matter of good building management the client had had a complete condition survey carried out by us some eight years ago. This was immediately useful, as it revealed that one of the defective areas was already showing, and little changed, but the other is new. Investigation continues.

Ipswich Museum is a fine piece of Victorian and Edwardian architecture and no part of it is plain or simple. Outside is all gables and parapets, intersecting roofs and wide windows. This is not achieved without a degree of structural challenge. So, in exploring the building, it is interesting to discover what engineering contrivances, concealed within roof voids and beam casings, were employed to satisfy the Architect’s creative imperative. Appearance came before practicality and I doubt whether he gave much thought to the maintenance responsibilities of future generations.

Ipswich Museum is built in the Queen Anne style made popular by Richard Norman Shaw. Designed in competition by architect Horace Cheston in 1879, the principal façade is of embellished gables connected by a single storey open screen of paired fluted pillars and segmental arches. The windows are framed by fluted brick pilasters and modillion cornices which run above each storey. 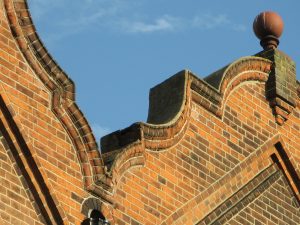 The terracotta panels on the main front are particularly exquisite with plants, garlands, flowers, fruit, dragons and shells along with two portrait heads of Isaac Newton and William Hogarth.

The inside of the museum is no less spectacular. The entrance hall has coffered ceilings and an open well staircase with elaborate iron balustrade. The design is repeated as the gallery balustrade in the main exhibition hall. This gallery is supported on decorative iron columns.

South of the museum is the Fine Art Gallery, separately designed by Cheston and not initially connected, while to the north and east the museum was extended in 1893 and 1900; all in the same grand brick construction if without the display of the High Street elevation.

This museum is a building of outstanding importance for the quality of its exterior and the survival of the interior complete with original fitted display cases. It boasts the character and ambience of a bygone era and presents an excellent example of an almost unaltered late Victorian museum. This is very rare and so it is vital we continue to work to protect it. 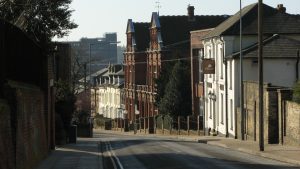 We need bricklayers – not robots

What buildings are “At Risk” in the East?
Scroll to top