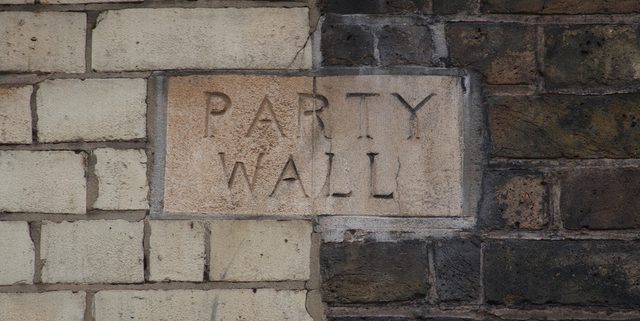 Last week, Pippa Jacob attended a seminar about The Party Wall Act 1996 presented by Justin Harvey from JP Chick and Partners, and provided by P&T Club, an organisation with a particular specialism in this piece of legislation. Here she explains why you shouldn’t let your plans go to the party wall when it comes to home renovations.

The human race is fiercely territorial. So, if an Englishman’s home is his castle, it stands to reason that he will fight to protect its boundaries.

In 2005, pensioner David Jollands of Caythorpe, Lincolnshire, aggrieved at next door’s planting of a leylandii hedge, decided to kill it by urinating on it every night for a year. As time wore on, he watched with satisfaction as the hedge turned brown and failed to grow but the overpowering smell roused the suspicions of his neighbour, Russell Brooks, who caught the act on camera and pressed charges.

Incidents like this prove boundary disputes can be so ridiculous that they are downright comical. But even the smallest of boundary disputes can end up costing thousands of pounds in legal and surveyors’ fees. This spiral of charges can be set in motion over ownership of a fence, overhanging branches, dense hedges, shared drainage or driveways and party walls. And it is this latter issue which we want to focus on here.

The Party Wall Act protects you and your neighbours during any home improvements. It was introduced on 1st July 1997 in England and Wales – with Scotland and Northern Ireland exempt – and states that if you are carrying out works governed by the Party Wall Act, you need to serve a party wall notice on your neighbours. This must be done at least two months before the notifiable works begin, and at least one month before the notifiable excavation works begin. Getting this wrong could delay your build and make your project more expensive.

Generally speaking, the Party Wall Act covers all floors and ceilings between flats, shared boundary walls, such as those between semis and terraced homes, and any other walls which touch the boundary. Carrying out minor tasks such as fitting shelves, replastering, wallpapering and electrical rewiring are not included. But more extensive work – the type typically undertaken by external contractors – is.  This might include converting a loft, adding an extension, basement conversions, underpinning, inserting a damp-proof course, increasing the thickness, or demolishing and rebuilding a party wall.

Foundations for a smooth build

If the work you are planning involves any of the above, you need to serve notice on all the owners of every neighbouring property affected by the works. You don’t need planning permission for your plans to serve notice, and once you’ve done so you can take up to a year to start work. If your plans change slightly after you’ve served notice – for example, if you decide to increase the depth of your extension – you should be able to submit revised drawings to your neighbour without having to serve a new notice.

Failure to comply with the act could result in your neighbour taking you to court and obtaining – at your expense – an injunction to prevent you from continuing with the work.  And if any damage is caused to your neighbour’s property, a judge can award compensation too.

Once you have served notice, your neighbours have 14 days to respond.  Work can go ahead immediately if they agree in writing. The permission will remain valid for a year to complete work.  If however, they reject or do not respond within 14 days, then you’re deemed to be in dispute. You and your neighbour can then agree whether one surveyor can act for both of you or whether two surveyors should be involved in drawing up a party wall award. The ‘Award’ will determine the work that can be carried out, how and when, measures for preventing damage as well as recording the current conditions of both properties.

For more information on the Party Wall Act visit http://www.partywalls.org.uk

Should tourism trump history? Or can it play a part in conservation?

Do architects still put pen to paper?
Scroll to top
Sign up to our monthly newsletter