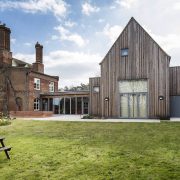 Winning an award for your work is the ultimate compliment. But for Nick Jacob and Hugh Bunbury, the pleasure comes from watching that beautiful space be embraced by the community. This is certainly the case with The Avenue Theatre, Ipswich. Here we find out more about the project and the people behind it.

Earlier this month we won a ‘highly commended’ award for our work on The Avenue Theatre.

Judges at the RICS East of England awards earmarked the project for excellence, celebrating our achievements in the design, plans, construction and restoration of the building.

But although we are delighted with the accolade, we are equally happy that the client – the Red Rose Chain Theatre Company – now has a home to be proud of.

The Red Rose Chain are an entirely independent and self-sustaining theatre company that puts on original productions that confront social concerns, often working with overlooked or hard-to-reach groups and vulnerable adults.

It boasts an exciting community programme that works with youth groups, local schools, the disabled and disadvantaged people in the area of Ipswich, increasing accessibility to the arts.

The organisation has operated out of a series of buildings behind Gippeswyk Hall, Ipswich for many years but desperately needed new studio space to offer its services to more people in the county.

How it all began

In 2010 the group decided to demolish rehearsal buildings which had fallen into a state of disrepair.

The ceilings were falling down, the kitchen was old-fashioned and no longer fit for purpose and the central heating was ineffective.

Keen to create a space which would accommodate a 120-seat theatre studio, foyer, back stage area and home for community projects, the Red Rose Chain applied for a grant from the Heritage Lottery Fund.

It then launched a national design competition to select the architect for the project.

And we were delighted to be picked, refining the brief and developing the design before starting work.

The site for the development was at the rear of the theatre’s Gippeswyk Hall headquarters.

A Grade II* listed Tudor manor which dates back to the 16th century, it had a Victorian lean-to extension along with a 1960s single storey pre-fabricated unit in very poor condition.

While the 1960s annexe needed to come down, the lean-to offered opportunity for renovation and restoration.

We replaced the 1960s extension with an environmentally friendly, sustainable and original building and created a modern kitchen within the Victorian lean-to, adding in a dining room and a new bar.

The Victorian arched window that created a second opening between the dining room and main entrance was removed, restored and used in the new kitchen.

The studio space was built in the style of a traditional Suffolk barn, linking to, but running independently from, the Hall and the pitch and width of the studio gable was made to match the existing proportions of the original building.

A glass connection between the two buildings was formed to make a main public entrance and foyer space with toilets. A courtyard with planting and seating area was also created.

All materials and finishes were picked to sympathetically tie the Grade II* Listed Hall with the new build.

We selected a narrow pallet of materials which included peg tiles on the roof to match the Hall and Siberian Larch vertical boarding to clad the studio.

The idea was the blend new and old to make the space as versatile as it was inspirational.

The foyer and entrance space was built with glass to allow for it to be completely opened up in the summer months.

And internally we introduced a strong colour system to distinguish between public and private areas.

Red, inspired by the company’s name, was used in the foyer and toilets and green was used for the back of house areas.

A future for the community

The new studio theatre was opened to the public in February 2015, offering a unique and interactive theatre experience as well as a host of other community benefits.

The Red Rose Chain wanted to project to echo its ethos – that they have “a strong sense of community in the heart of everything we do”.

And we were keen to get on board with this vision.

We took time to work out which community outreach projects would benefit from the new space and incorporated design elements to assist these.

One project involved cooking and sharing meals for example, so the kitchen space was given a professional makeover to allow for large groups to work together.

We also worked hard to ensure the space was bright, vibrant and engaging so it would appeal to the groups of vulnerable adults who meet weekly for immersive drama workshops and the youth theatre.

The building is also suitable for people with disabilities, with wide access points and external pathways and level floors.

As a heritage project, our work has improved and restored a neglected building, providing a beautiful space for new visitors to the area.

But it has also created a resource and new home to a wonderful organisation – a theatre company which runs vital community projects and an acclaimed education programme.

So yes, we are thrilled to win an award for our work. It has been a labour of love.

But we are also delighted that we have given this space back to its community who will benefit so much from it in the years to come.

Suffolk Coastal District Council ‘Quality of place awards’ for building...
Scroll to top
Sign up to our quarterly newsletter