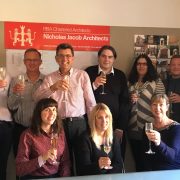 A leading Architectural practice in Suffolk is celebrating 20 years in business this month.

NJ Architects, based in Ipswich, was founded in 1996 by Nick Jacob, and the firm will have been practising in the Eastern region for 20 years.

The RIBA Chartered practice offer a full range of architectural services in both the commercial and residential sectors.

As well as marking their 20th anniversary this year, NJ Architects have also received a series of prestigious award nominations to add to their impressive list of credentials.

The firm received a ‘Highly Commended’ award for its work on The Avenue Theatre at the RICS East of England awards, and another commendation from the SJCC awards for St Lawrence Church, Ipswich.

NJ Architects were also commended by the Georgian Group, a charity for the protection and appreciation of British architecture of the period, for their work on Darsham House.

Nick Jacob, comments, “We are thrilled to be celebrating our twentieth year in business. It’s a huge landmark for the firm, and we are proud to have a very loyal and experienced team who make progress possible each day.

“It’s been a very exciting year for us at NJ Architects, we have received several industry recognitions for various projects, which is hugely rewarding.

“We plan to continue on delivering work to the highest of standards, with the support of our fantastic team and clients.”

The firm will celebrate their anniversary with a party to be held next year.