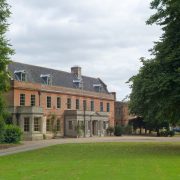 We’re thrilled to announce that we have won an award for our restoration of one of Suffolk’s most beautiful Georgian homes.

We have been commended by the Georgian Group, a charity for the protection and appreciation of British architecture of the period, for our work on Darsham House.

This is our third accolade for the Grade II* listed country house which scooped the 2013 Award for Building Conservation at the Suffolk Coastal District Council’s Quality of Place Awards and an SJCC Outstanding Craftsmanship Award in 2014.

Shaun Soanes, who oversaw the project, said: “Darsham House suffered many years of neglect and some unauthorised alterations had been carried out resulting in nine enforcement notices by the local authority.

“This meant it was in a sorry state of repair when the current owners bought it and there were reams of red tape to unravel.

“Restoration took two and a half years and involved unpicking modern intrusive repairs and modifying some of the more incongruous alterations.

“Rectification works were also carried out to comply with the enforcement notices.”

The Georgian Group commended the project for enhancing and revealing the building’s character.

Mr Jacob said: “Darsham House now benefits from custodians who understand its significance, enjoy it and intend to maintain it. We have been proud to play a part in its protection.”

Property of the Georgian era is carefully proportioned and reminiscent of traditional dolls houses. Architects who built British homes between 1713 and 1830 include Sir John Soane, James Wyatt and Henry Holland.

Other properties in the UK recognised by the Georgian Group Architectural Awards include Belmont, the salmon-coloured Landmark Trust villa in Lyme Regis, Dorset, and Croome Park, the National Trust site in Worcestershire, which boasts a Capability Brown landscape.